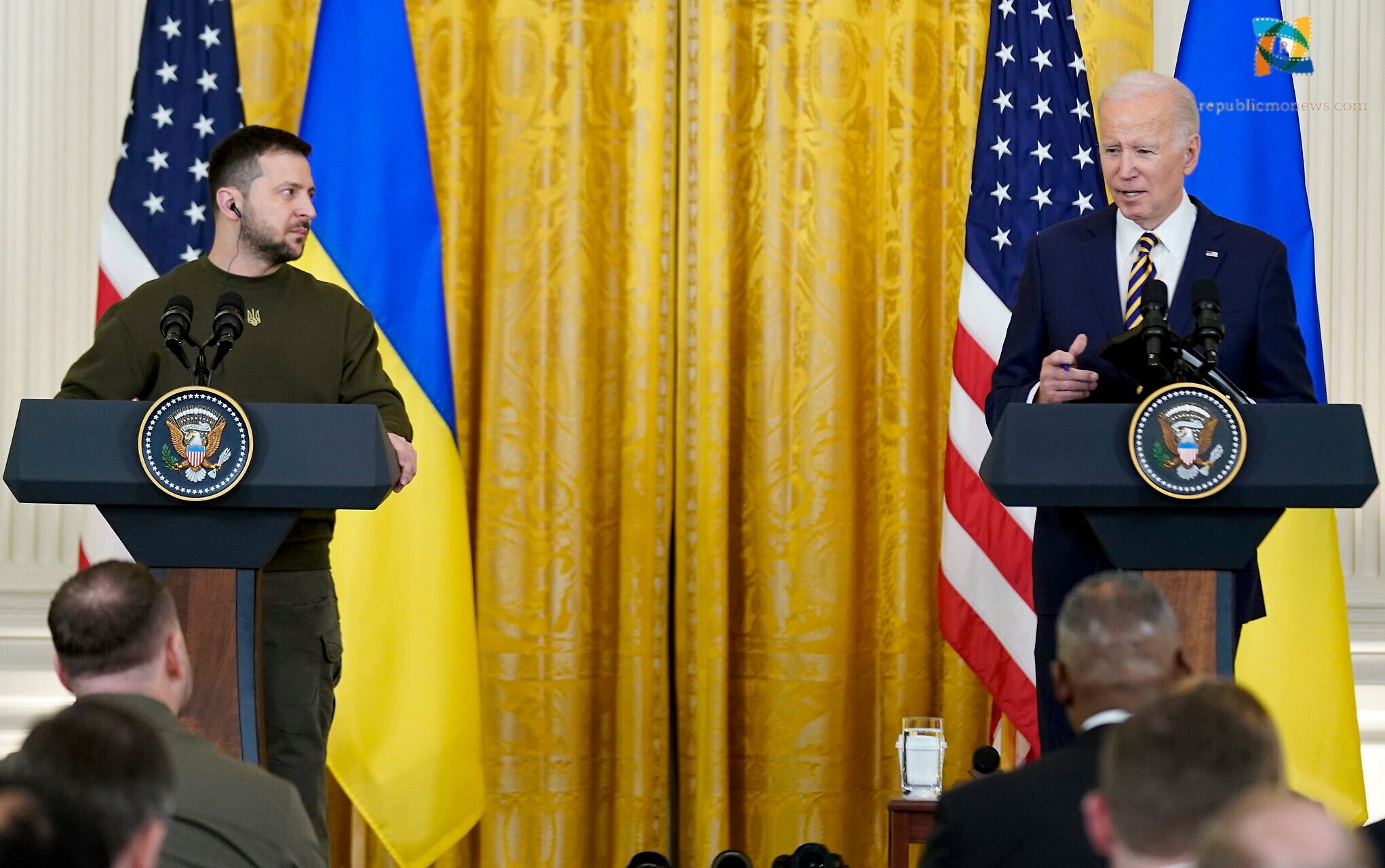 Image Source: The Times of Israel

Ukrainian President Volodymyr Zelensky on Wednesday made his first visit outside his homeland to the US since the war against Russia. The Ukraine president arrived at the White House for talks with President Joe Biden and also to thank the leaders for their constant support in the Russian invasion. As the US is finalising a $ 45 billion package for Ukraine as humanitarian and military aid.

The US trip is Zelensky’s first trip since 300 days after the Russian invasion outside his homeland. Zelensky opted a casual attire rather than wearing a formal suit and landed in a US military plane at Andrews Air Force Base to meet US president Joe Biden joined by his wife Jill at the White House. The meeting comes before a joint meeting of Congress on Wednesday night at the US Capitol. 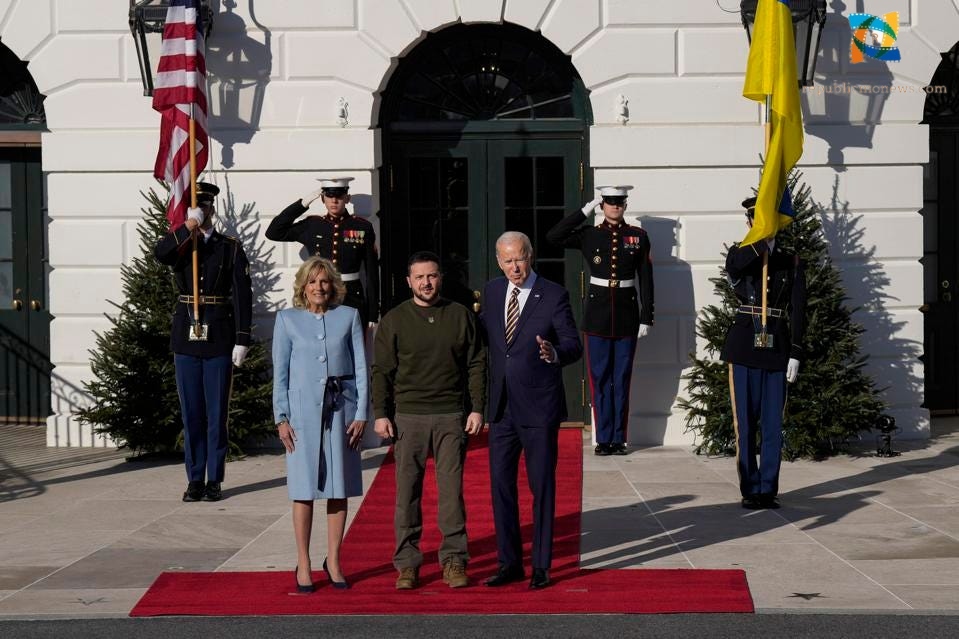 Joe Biden during his meeting with Zelensky’s criticizing Russia said-

“Hard to believe, 300 days going through this brutal war. Putin has waged a brutal assault on the Ukrainians’ right to exist as a nation, and the attack on innocent Ukrainian people for no reason other than to intimidate.”

Ukraine President Zelensky thanked the US in the meeting and said-

US President Joe Biden confirmed that it will supply a Patriot missile system to Ukraine thus increasing the country’s air defence capability. Since the Russian war against Ukraine, the US military estimates that at least 100000 Russian and 100000 Ukrainian soldiers have been killed along with some 40000 civilian deaths. The military further recorded that nearly 7.8 million people from Ukraine as refugees across Europe, although the figure excluded those who have been forced to leave their homes but remain there. 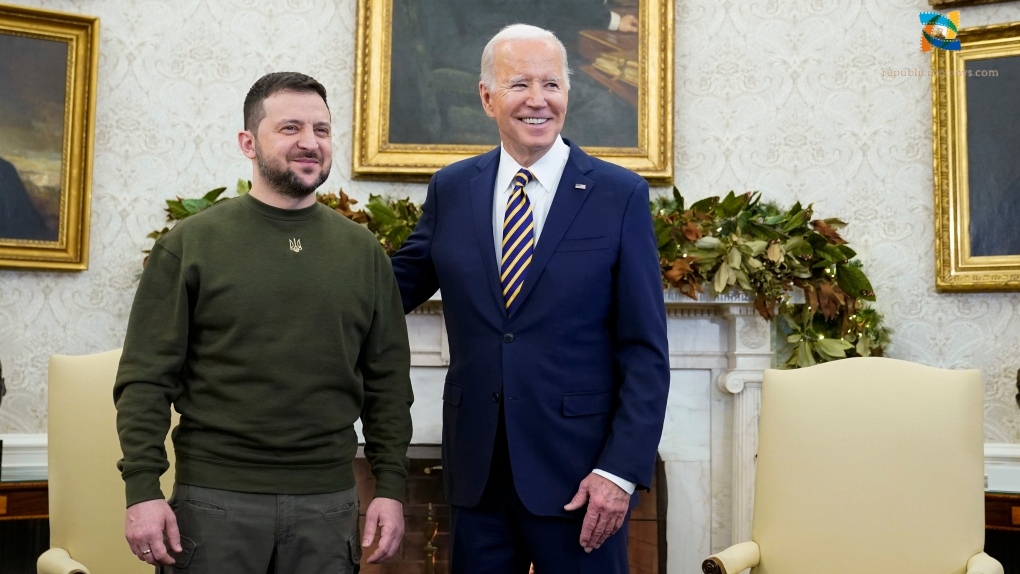 1 Zelensky greeted Americans for their support and said- “Your money is not charity. It is an investment in global security and democracy”.

2 “It would be naive to wait for steps towards peace from Russia which enjoys being a terrorist state. Russians are still poisoned by the Kremlin. The restriction of the international legal order is our joint task”.

3 “We need peace. Ukraine has already offered proposals, which I just discussed with President Biden, our peace formula, ten points which should and must be implemented for our joint security guarantees for decades ahead.”

4 “If Russian missiles attack us, we’ll do our best to protect ourselves. If they attack us with Iranian drones and our people will have to go to bomb shelters on Christmas Eve, Ukrainians will still sit down at the equality table and cheer up each other. And we don’t have to know everyone’s wish as we know that all of us, millions of Ukrainians, wish the same victory.”

6 “How many parents lost their sons and daughters on the frontlines? So what is just peace for them? Money is nothing. Reparations are of no consequence. They (parents) live by revenge.”

7 “The longer the war lasts, the longer this aggression lasts, there will be more parents who live for the sake of vengeance and I know a lot of people like that.”

The Ukraine President after the Visit to the US tweeted: “I thank @POTUS for the warm welcome and I deeply appreciate all the support of the U.S. and the American people. I am confident that together we will be able to secure a better, prosperous, and free future for both of our nations. Ukraine’s victory will also be America’s victory.”

Read Also: A source confirms the Mets traded James McCann to the Orioles, and signed Danny Mendick as an infielder