'The Quintessential Quintuplets' Is Rumored To Have An International Release The release date for the Quintessential Quintuplets movie in Japan was recently announced on December 29, but fans from outside of Japan are asking whether the movie will also be released internationally. 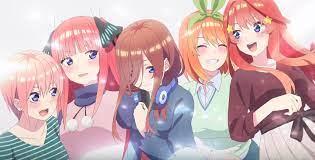 In Japan, the 5Toubun no Hanayome Quintuplets are referred to as the Quintessential Quintuplets. The title is spelled Gotoubun, which is how the first word is spoken. Poor high school student Uesugi Fuutarou (voiced by SAO’s Kirito, Yoshitsugu Matsuoka) is assigned the task of instructing the Nakano girls, a set of five quintuplets. We have Ichika, Nino, Miku, Yotsuba, and Itsuki (Inori Minase).

The Quintessential Quintuplets manga is written and drawn by Negi Haruba. His first manga in which he wrote and illustrated the plot. It immediately became one of the most popular romantic comedies of the previous 10 years in the United States. For the Shounen Manga category, the manga received the Kodansha Manga Award in 2019.

On May 20, 2022, the movie will be released in Japan, according to the Quintessential Quintuplets Twitter account, but there is no word on when it will be released outside. A fresh teaser for the film’s release date was also posted on Twitter. Click here to see. The length of the film has also been verified by the team. As a last point of clarification, the film will be the concluding chapter of the anime series.